There are few persons who are not familiar with the story of Samson, who possessed such supernatural strength, and his wooing of the fair Delilah. We first see Samson as a little baby, when his happy parents offer him up to God in the presence of a multitude of peasants. The next scene is years later, when he is possessed of such wonderful strength that he is the horror of the Philistines. They capture him and lead him into a courtyard, where they fasten him to a massive door to prevent his escape, but he astonishes all by getting a firm grip on it, and dragging the heavy gate away from its fastenings, throwing it aside like a piece of cardboard and walking out defiantly. In the next picture we see the King and a large mob in a public square, where the former is inducing Delilah to tempt Samson and win his love by strategy and learn the secret of his wonderful strength. Samson is soon on the scene and falls an easy prey to Delilah's beguiling ways and she lures him into her apartment in the castle, where she makes love to him. In a playful manner she binds his arms with heavy chains, then, to her great astonishment, he breaks them like thread. Finally she lulls him to sleep, and during his slumbers she accomplishes her purpose, cutting off his hair. When he awakens he is completely in her power and is led out a captive and thrown into a dungeon, where his enemies burn out his eyes and compel him to roll a large stone wheel to grind corn. In the last picture we see the King and the throng of people in the pagan temple, where they are worshiping images, and sending after Samson they try to force him on his knees to adore their gods. While he is imprisoned his hair has grown and he has regained his strength, and horrifies his captors by casting them aside and groping his way to the entrance of the temple we see him stand between the main supporting columns, and, putting them asunder, causes the vast structure to tumble down, killing himself and many of the multitude. The last picture shows him as he enters into his eternal home in Paradise.

1. While still a baby, Samson is offered to God by his parents in the presence of a crowd of peasants.
2. Several years later and while he is in possession of his extraordinary strength, he is the terror of the Philistines. They capture him and lock him up in a prison with a huge door, but they're scared to see Samson break down that door like a cardboard box and walk away.
3. The king of the Philistines and a large crowd is in a public garden when he invites Delilah to seduce Samson and thus learn his secret. Obviously, Samson soon falls into the clutches of Dalila who takes him home. After love, she chains him but he breaks his chains. Finally, when he is asleep, she cuts his hair and thus deprives him of his strength. He is thus at the mercy of his enemies who put him in a dungeon where they burn his eyes and force him to push a huge stone millstone to grind corn.
4. The King and the priests want to force him to worship their Gods but during his imprisonment, his hair has grown back and his strength has returned to him. He, therefore, terrifies his captors by chasing them then groping his way, he arrives at the door of the temple and, knocking down the columns, makes it collapse on him and on the multitude.
5. The last painting shows Samson entering Paradise. 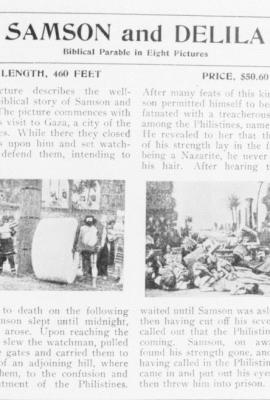 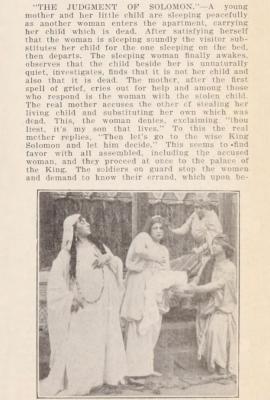 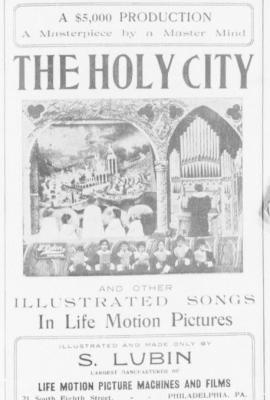 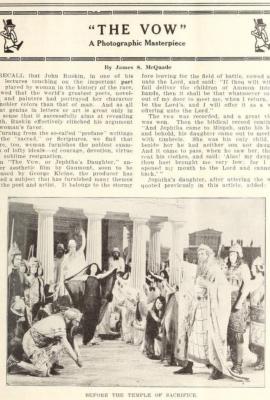