Based on the book by Timothy Shay Arthur's temperance novel "Ten Nights in a Bar-Room and What I Saw There". It's not the first film based on the book, but possibly the second, and it is in five parts numbered 1910-1915 in the American Mutoscope & Biograph catalog. According to "Early Motion Pictures: The Paper Print Collection in the Library of Congress" these were filmed 19. June 1901 but released on 5. May 1903.

Ten Nights In A Barroom

The Fatal Blow
The opening scene was photographed outdoors on a set of a saloon. The action begins as two men greet one another and sit down and have a drink at a table near the bar. Another man, acting intoxicated, comes in and begins insulting the bartender and guests. A fight ensues and a woman, not previously in the picture, falls down in front of the camera apparently having been struck by something that was thrown. At the end of the film, the intoxicated man is prevented from striking the bartender with a chair.

First of a series of dramatic scenes from the popular play. In a drunken brawl in Slade's saloon, Slade throws a beer glass at Joe Morgan and hits his own child as she enters the door.

The Murder of Willie
Two men are playing cards at a table on a set of a saloon. Behind the bar is a saloon keeper. A door opens, and a man in a linen duster enters, buys and consunies two or three drinks, and leaves. As the door closes, perhaps on signal, the two men at the table begin an altercation over what seems to be one player's cheating. A fight starts in which the bartender is rendered hors de combat. The man in the linen duster reenters and breaks up the fight.

A series of dramatic scenes from the well-known play. This is the second. Two men playing cards engage in a quarrel and one stabs the other. The murderer is arrested by Simple Switchel.

Vision of Mary
There is one-camera position of a scene that begins with a woman walking into a sitting room accompanied by a man who embraces her. At the time of the embrace, an image of an angel with outstretched arms is superimposed.

Morgan has reformed and is shown with his wife [1] their happy home. The child Mary appears to them in a vision.

Death of Little Mary
The whole story was filmed from a single-camera position. The action takes place in a set of cither the bedroom or the living room of some people in poor circumstances. A little girl with her head bandaged is lying on the bed in the center of the room, with a man and a woman standing over her. Judging from their gestures, they are anxious over the possible death of the young girl. As the film ends, the child falls back against the pillow as if dead. The woman attending her swoons, and the father falls on the foor in a faint.

This is the fourth scene. The little girl is lying on her cot. Morgan, the father, has delirium tremens and strikes at imaginary objects with a chair. The child rises up during the excitement and falls back dead.

Death of Slade
The first scene takes place in a set of a saloon. The first person visible is a man seated in a chair with his head rolling about as if he is completely intoxicated. He starts to rise to his feet as another man comes in. The second man's actions convey the impression that he also is intoxicated. The two men continue to act completely demoralized by alcohol. One falls down as if dead, and the film ends.

Slade is killed by his son, who hits him over the head with a bottle while Slade is in a drunken stupor. 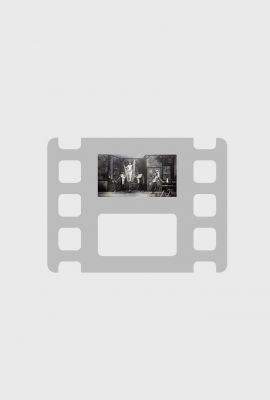